Building democracy in a public space

The Vancouver Art Gallery’s north plaza has an important place in the city’s history and future.

If democracy has an address in Vancouver, it is 850 West Georgia Street. The Vancouver Art Gallery’s north plaza serves as a place of celebration, expectation, mourning, and protest. A fixture of Georgia Street’s celebration corridor, the plaza plays host to events like the annual Jazz Festival. In anticipation of the 2010 Winter Olympics, a clock was located in the plaza that counted down the seconds to the beginning of the opening ceremonies. After national and international tragedies, people gather in the plaza to mourn collectively and to hold vigils. The plaza is also a space where people give voice and action to their beliefs in the form of protest. But most importantly, it is a space that brings people together.

The north plaza is being redeveloped by SALA professor Matthew Soules, whose architecture firm, Matthew Soules Architecture, is part of the design team that also includes Hapa Collaborative and Nick Milkovich Architects, the lead consultant. In reimagining the space, they are addressing the barriers that have restricted access to the plaza and ensuring that it continues to be a dynamic space of civic engagement for years to come. To do this, they are transforming the plaza into a more usable space for the people and functions that most often occur there. They have outlined six guiding principles that have propelled the project forward and helped them to achieve this goal.

The original north plaza and the building that now holds the Vancouver Art Gallery, a former Court House, was designed in 1905 by Francis Rattenbury. From 1978 to 1983, Arthur Erickson redesigned the north plaza and the surrounding area. This included renovations to the current art gallery and the construction the new law courts along with the connecting spaces and plazas. It all became collectively known as Robson Square. 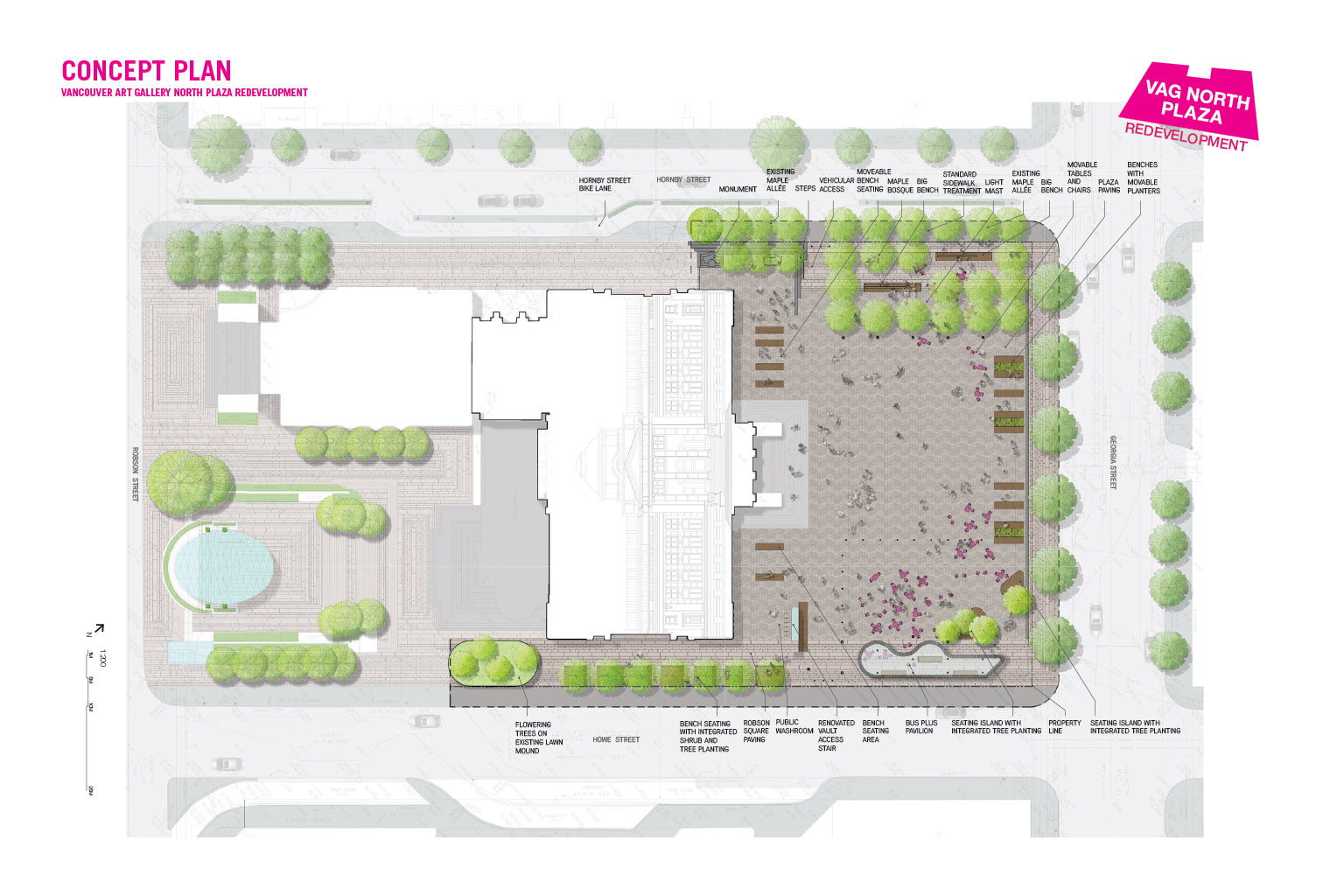 Initially, there were plans to erect a tower at Robson Square. However, Erickson subverted the proposed form by literally turning it on its side. In this way, the plaza and the connecting spaces of Robson Square are symbolic of a tower lying on its back, allowing people to transgress the metaphorical barriers contained in the conventional structure by literally walking all over it. This sentiment is reflected in the north plaza by the protests that embody the same spirit of resistance that Erickson had designed into Robson Square. But the north plaza presented several physical barriers that Matthew and the design team needed to overcome before it could be properly realized.

The largest and most prominent was the fountain near the plaza’s centre. “The fountain was a large element in the centre of the plaza that blocked people from being in the best location to watch music or listen to speech,” says Matthew. It also produced significant challenges for people with mobility issues, as it created multiple levels within the plaza. So the design team decided to remove the fountain and place it in storage, as it had also fallen into disrepair and was no longer functional. 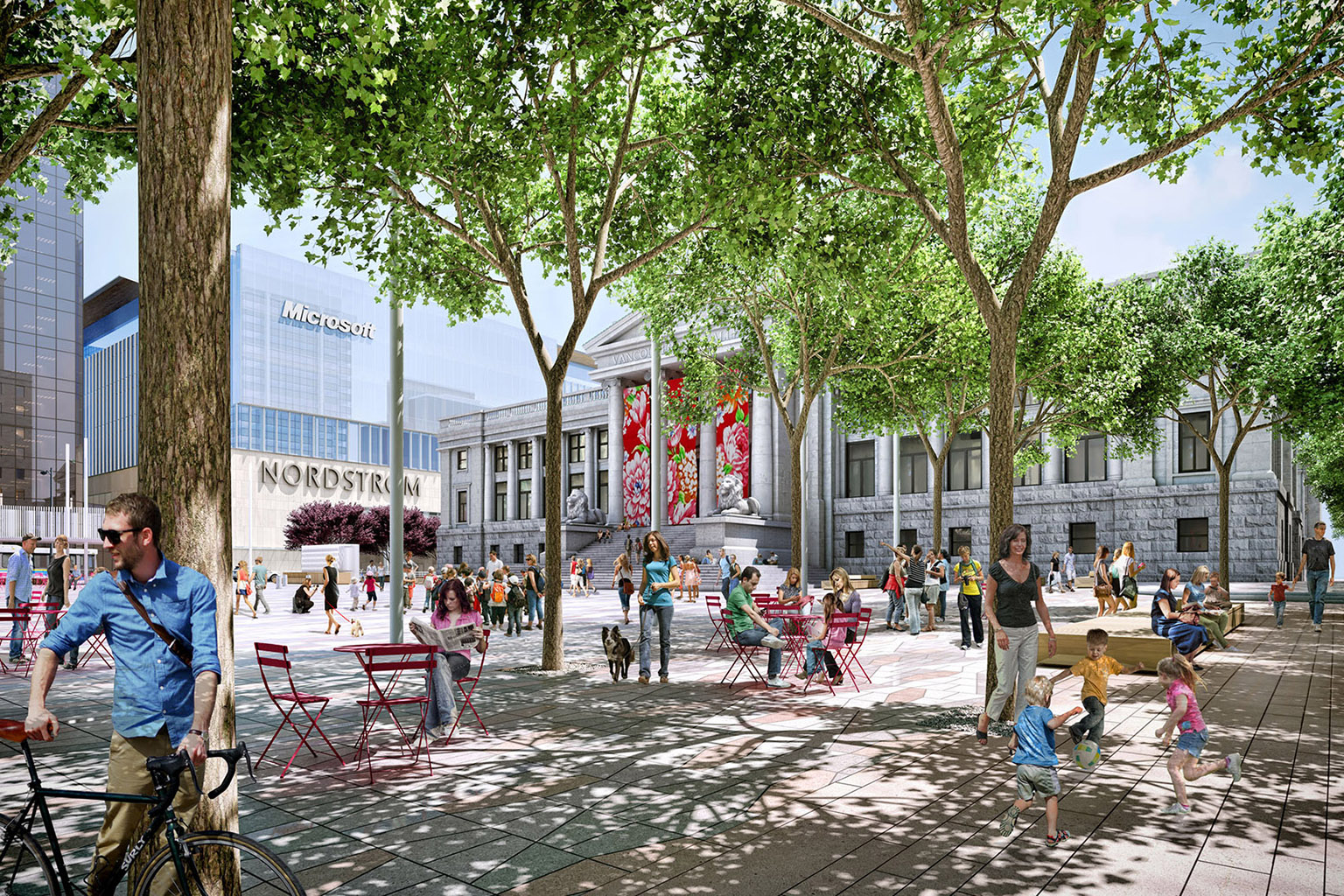 “At the same time,” says Matthew, “sets of stairs and plantings broke the plaza space apart into small elements that reduced its flexibility.” These things prevented the space from hosting large groups of people and didn’t allow for an organic flow of movement. Matthew notes that in Vancouver’s climate, “the grass surfaces also made large parts of the plaza unusable because grass easily becomes damaged and muddy.” The city had attempted to address this concern during the 2010 Winter Olympics by temporarily covering large portions of the plaza with bark mulch. “However, the bark mulch was never removed,” says Matthew. “The result was that the space was a soggy eyesore for the last six years and hardly anyone actually used it.”

The design team decided to remove the large sections of bark mulch, opting for a more resilient surface material. This also produces a sense of continuity between the previously fragmented spaces, and helps to reawaken Erickson’s vision for a cohesive Robson Square. They are paving the perimeter of the north plaza with the original patterns that Erickson used and leaving the centre open to “create a single, unified, hard-surface space that is super flexible and adaptable to a degree that the prior design never was,” says Matthew.

By removing the obstacles that impeded the natural flow of the space and changing the surface materials of the plaza, Matthew and the design team have improved the plaza for normal everyday use and for special events. As Matthew notes, “in the everyday sense, a large number of people walk through the site as they move through the downtown.” With the redesign, people will be more encouraged to “also sit, relax, eat lunch, and people watch in the plaza.”

“But just as it can better accommodate diverse gatherings, it also functions much better for everyday use,” he says. This is accomplished through adding what they call “social infrastructure,” which will better position the plaza to support a wide variety of uses by offering things like: a diverse array of seating, unique lighting features, a consistent arrangement of trees that offer shade and help to frame the plaza, and a pavilion structure that can provide a multitude of services, including acting as a shelter from the rain. All these provisions will allow the space to function successfully for a variety of events at both large and small scales.

Working at a range of scales

A successful public space offers something to both the community and the individual. The redesigned plaza will contain enough open space to encourage and support the kinds of large gatherings and events that have historically occurred there, while also allowing people to find spaces for themselves. Matthew envisions the fundamental purpose of the north plaza to be a space that, “enhances the democratic function of the city life.”

“The north side of the Court House building has arguably functioned as the city’s most important civic gathering space since its creation in 1906,” he says. Through the decades, the space has been used for a variety protests. In the 1960s, UBC engineering students took to the steps, in 1970s people gathered for pro-life and anti-nuclear protests. “From royal visits to New Year’s Eve celebrations as well as protests on issues such as gay rights to anti-war demonstrations,” says Matthew, “the space has served this function.” 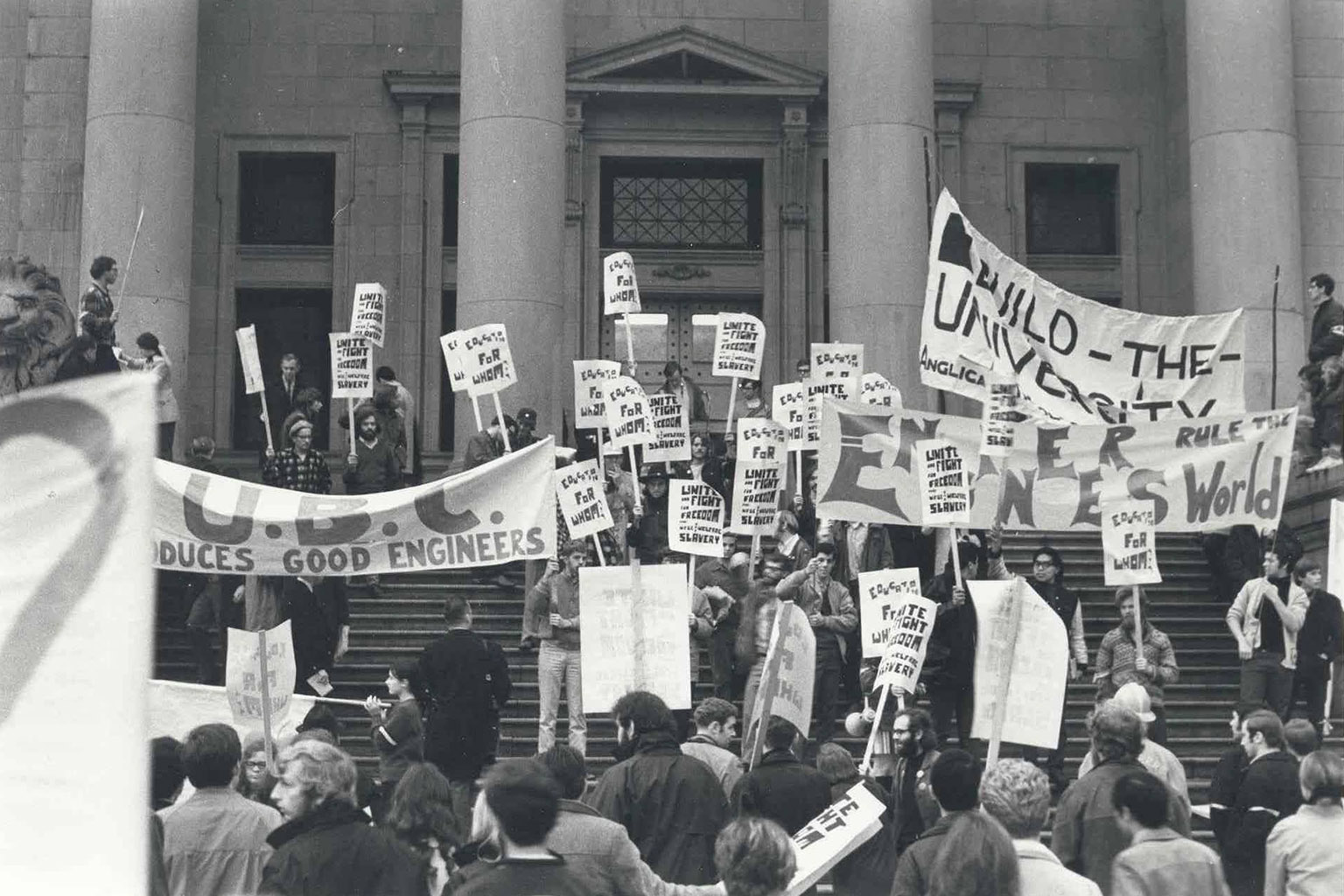 In respect of the democratic values that are connected with the space, Matthew and the design team solicited the opinions of the public before redeveloping the plaza. They asked questions about how people are currently using the plaza and what they would like to see changed. Through a detailed analysis of the public response, the design team was able to move forward with a plan that reached a form of consensus with the variety of visions that people had outlined for the plaza.

The north plaza has been a stage for people to voice their political inclinations since at least the 1960s. Matthew finds several reasons for the plaza serving this democratic purpose. “First, it is a publicly accessible open space in a prominent location at the heart of the downtown.” The plaza is highly viewable space to those travelling through Vancouver’s downtown core by car. Located on Georgia Street, “Vancouver’s main ceremonial street,” the people and functions that take place in the plaza are on display.

The plaza is also given prominence by the large buildings that surround and look down upon it. During the Occupy movement, the juxtaposition of financial towers created a stark contrast to the tents and people that gathered to protest social and economic inequality. As well, the “neoclassical edifice of the original court house building,” says Matthew, “signifies authority and serves as a backdrop for dissent even as the judicial arm of the government has long departed.” Foot traffic is another major factor in the plaza’s democratic function. The Vancouver downtown core is highly walkable, and the north plaza is located at a point of convergence between commercial, governmental, social, artistic, and intellectual interests. 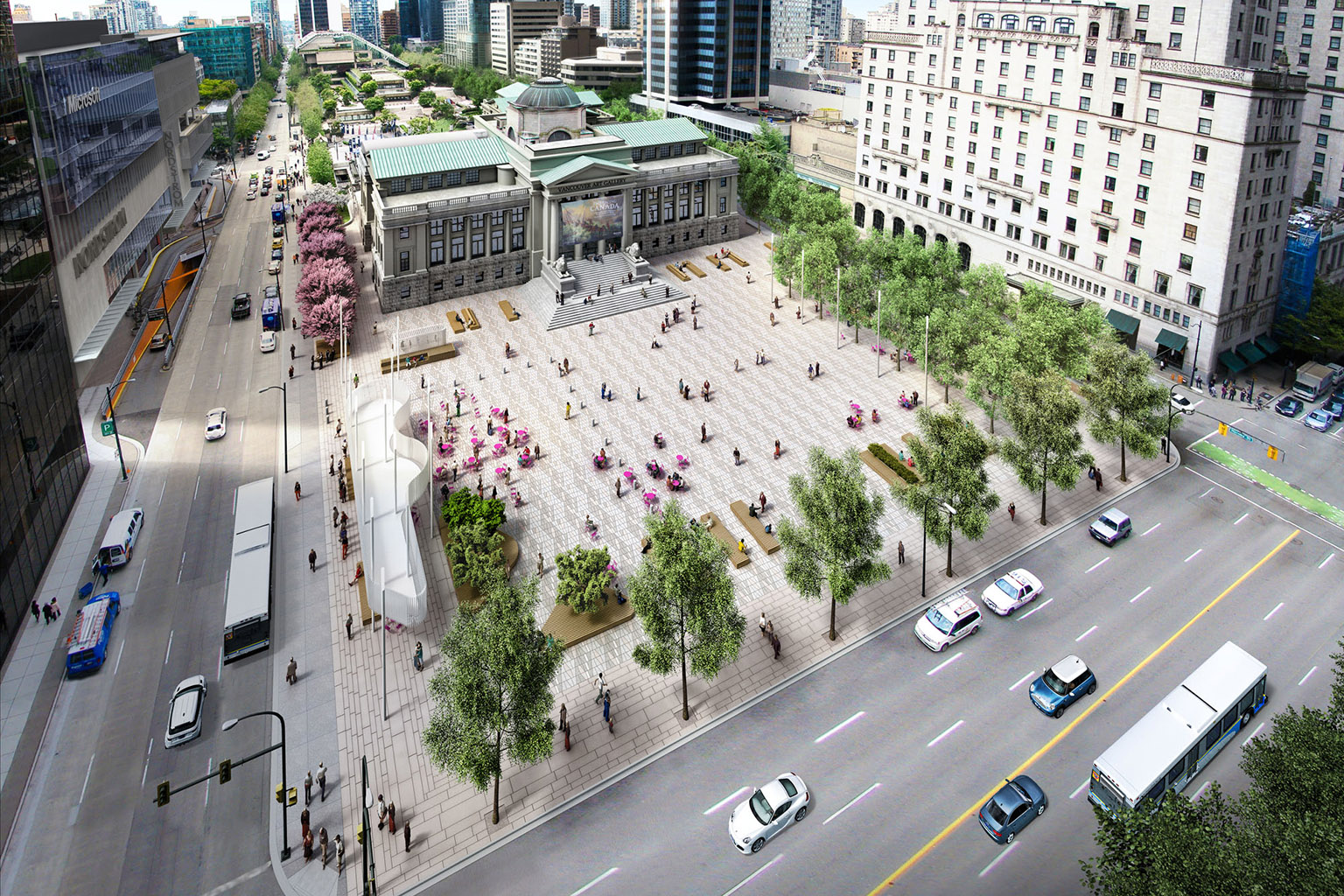 But perhaps the greatest reason for the plaza’s democratic function, and the one most improved by its redevelopment, is its size. While the large size of the plaza has historically allowed it to accommodate a large number of people, Matthew and the design team have vastly expanded its potential by removing the restrictive elements that had previously prevented access, like the fountain and the bark mulch. The north plaza is now much better positioned to serve its most important and fundamental purpose of facilitating democracy.

Reaching excellence through efficiency and agility

The north plaza redevelopment project has preserved and enhanced the fundamental civic ability of the plaza by removing barriers that prevented people from gathering and moving through the space. The design team has fostered a sense of cohesiveness with the larger Robson Square through their use of materials, while also eliciting an identifiable feeling of containment within the plaza.

Matthew says that they have accomplished this final goal by framing the plaza with trees and seating around the perimeter: “These elements balance a sense of enclosure with a sense of porous openness—you can always see and move through them.”

This balance between enclosure and openness is also representative of the internal tension of the space. The City of Vancouver owns the north plaza, which has so often become a place of resistance to government policy. The design team’s concept of “porous openness” enables the plaza to continue serving its important democratic function uninhibited from the restrictions the physical impediments that once held it back.

In this way, the north plaza has come to embody the dichotomy between governance and resistance that are fundamental to our understanding of democracy. The space allows people to exercise their freedom of expression through protest, to come together during periods of mourning, and to celebrate our collective and individual accomplishments. Because of Matthew and the design team’s careful treatment of the space, it will continue to serve these diverse and important functions for many years to come.