From ideas to objects

A look inside a SALA studio.

In a sun-drenched corner of Lasserre’s third floor, Matthew Soules has gathered his students for a studio session. Sounds of skateboarding periodically trickle in through the open slats of the window. The studio is rich with the smells of adhesive chemicals and other design supplies. Students have only been working on their projects for one week. It has been an exercise that focuses their attention on the formal issues of the tower. This studio session is an opportunity to join in a collective discussion and contemplate their progress.

Matthew is interested in following the design process from the very initial stages of an idea, the conception of a plan, and the execution through drawings and models. While not interrogatory, his questions do strike at the heart of inspiration. He wants to know exactly why the subtlest and most nuanced choices have been made. It is all in an effort to better understand how students are grappling with their new craft.

The larger studio is focusing on the relationship between contemporary capitalism and the tower. A structure that often manifests wealth and power, and whose regional popularity can be intimately connected to elevated property values. 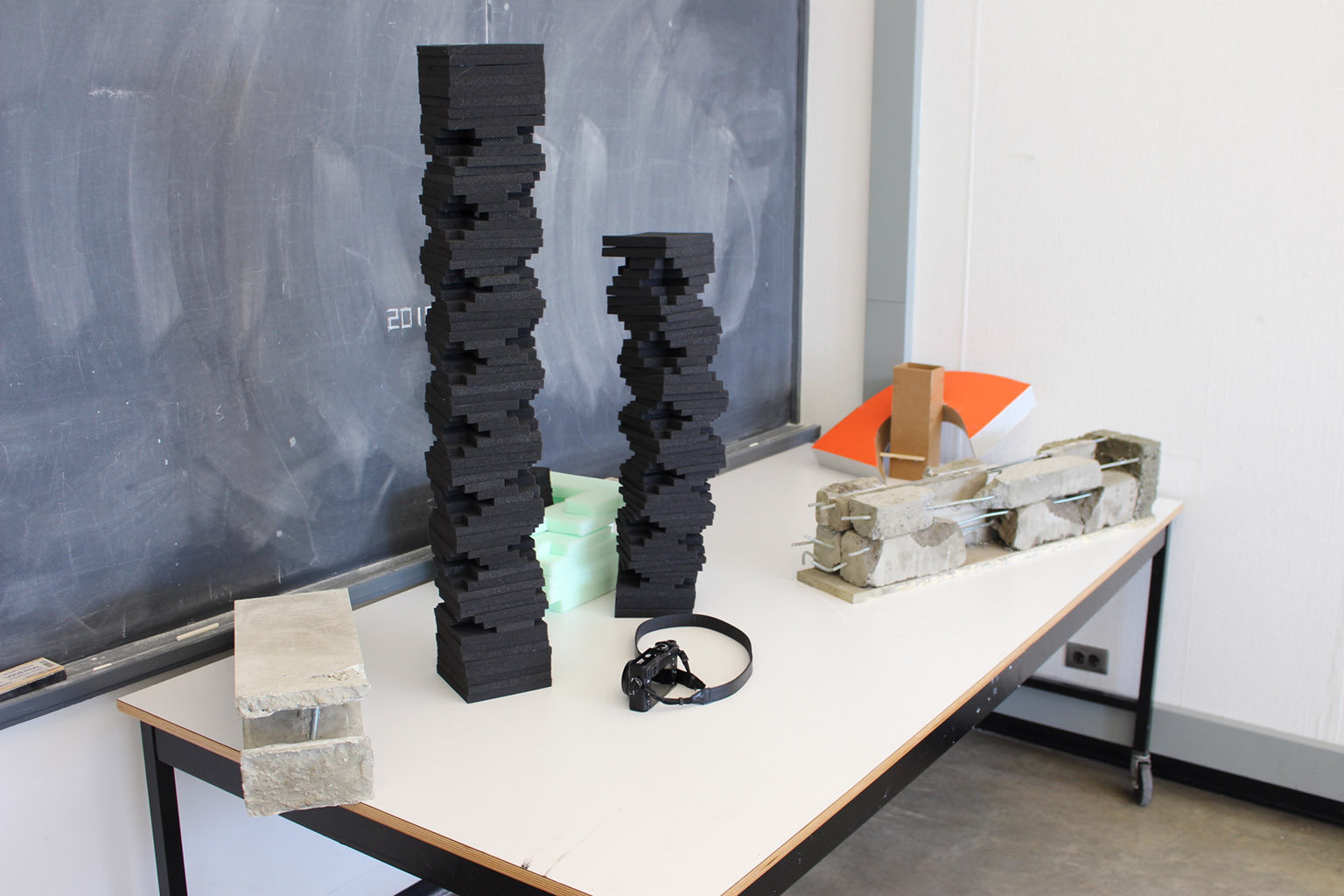 Various models and materials from the first studio session.

Students are called upon to contribute their opinions to their classmate’s work. Many students are relatively new to design, perhaps working for the first time to create three-dimensional models with varied materials, which seem largely to be of their own choosing. Some students are working with wood, paper, plastic polymers, and others have chosen the more brutal aesthetic of concrete—perhaps regretting this choice as they voice some physical exhaustion while lugging their projects into the studio.

One student has followed a particularly interesting and abstract idea in the creation of her project. She has taken the idea of stairs, something that she really enjoys, but has extracted only the essence of stairs to embed within her project. What’s interesting is that her project has nothing to do with stairs. In fact, it’s the complete absence of stairs. Matthew and the class enjoy this. The exercise is free from any constraints. He reminds the class that it’s intended to escape “more knowable” forms of describing buildings. 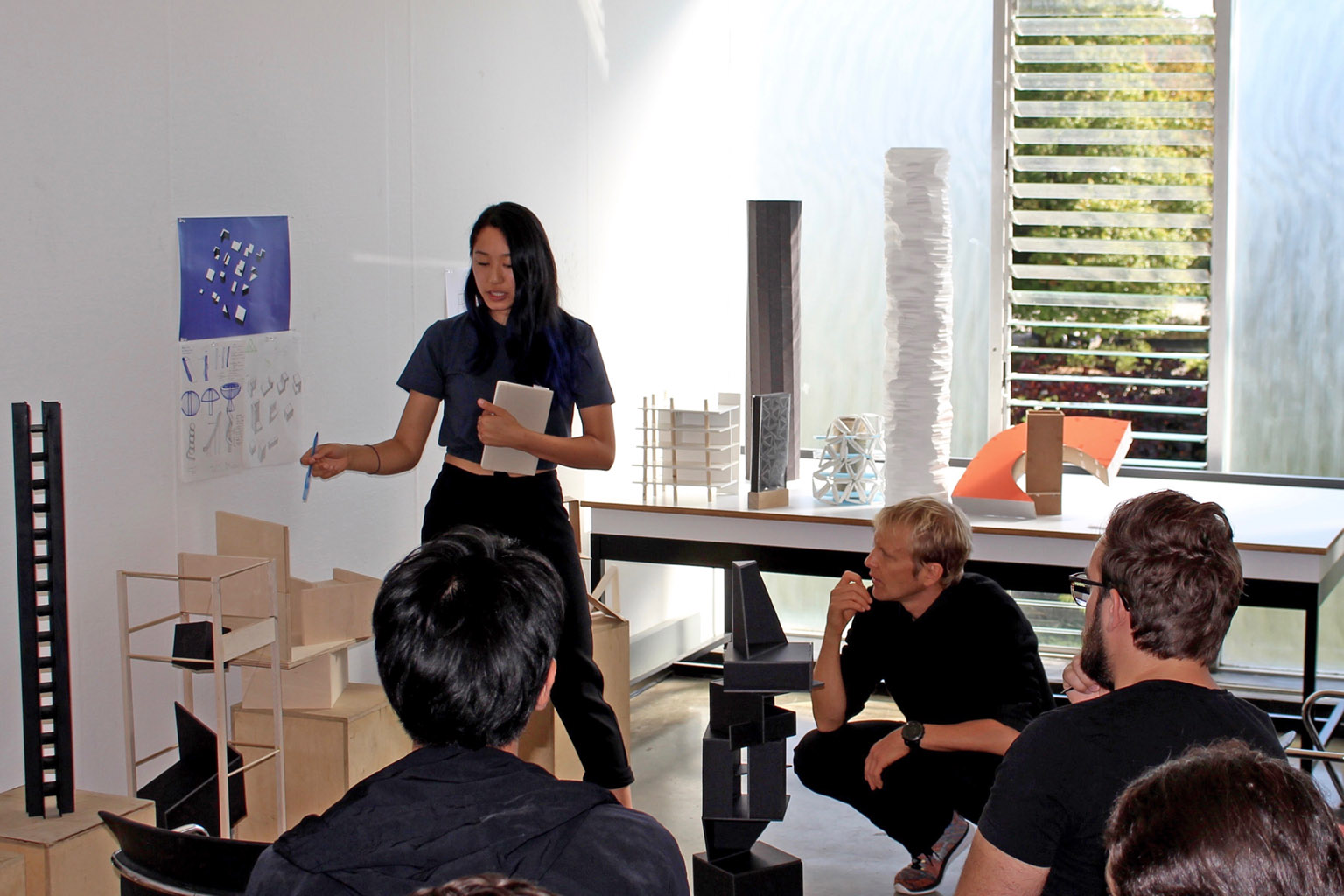 A student presents to the class.

Students are presenting a considerable amount of work considering class has only been in session for two weeks. They’ve got their initial sketches and drawings where they began to conceive their ideas and two or three models where they’ve executed on their plans and brought them into life. One student has created a beautiful twisting tower built around the concept of filling the space with triangle formations, something that the constraints of the space resists. This exploration is met with praise, but Matthew critiques another element of the student’s models, a rather traditional manifestation of a tower. “Don’t follow convention,” he advises. 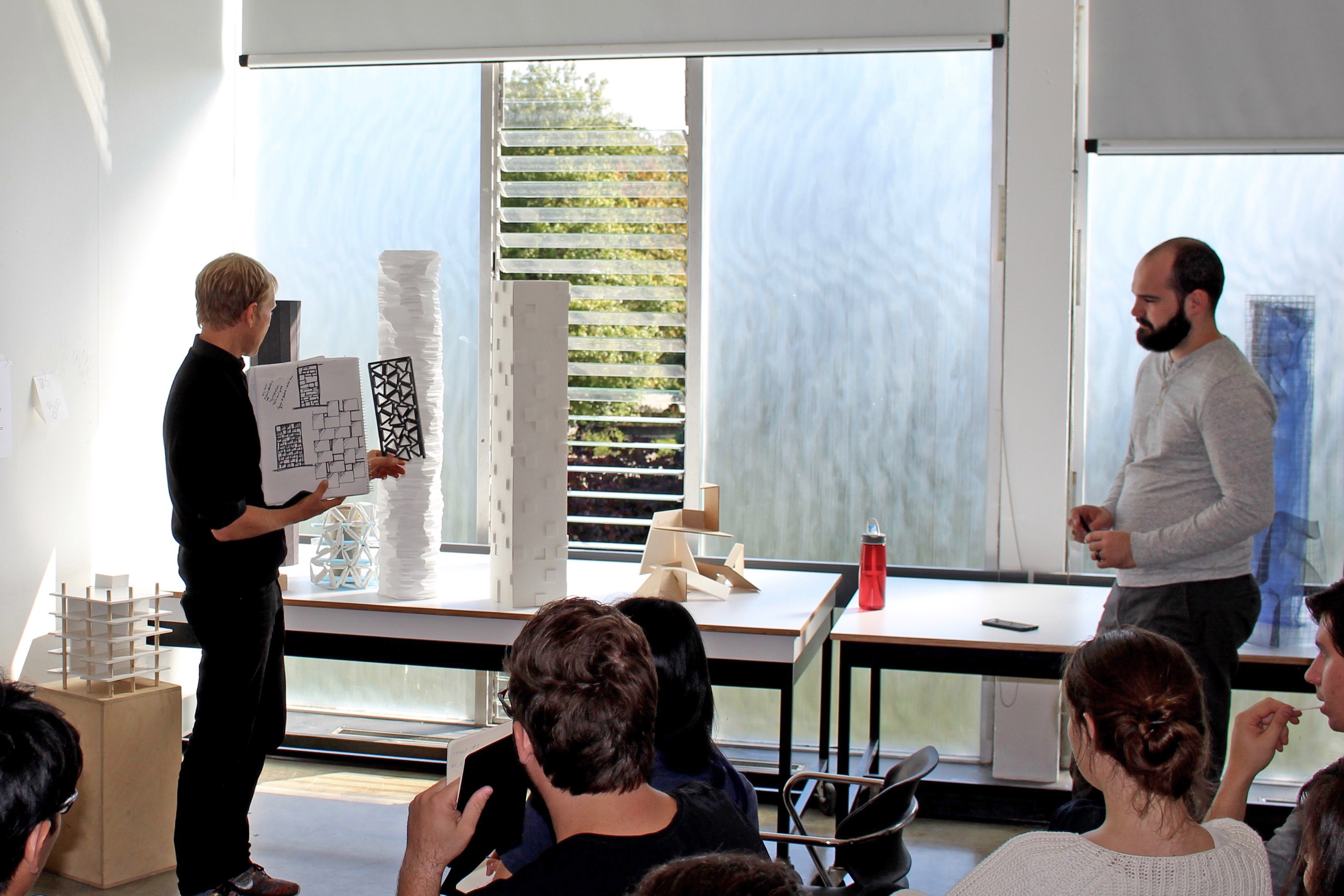 This formal presentation—as in the form of the objects being presented—allows the discussion to flow organically from praise, to probing inquiries, to disagreements, while always finding a final resting place in a piece of constructive feedback. This is a rare thing in academia, in any place in life, to allow and encourage students the freedom to explore their new mediums. There are conversations, there are disagreements, there is learning happening here. 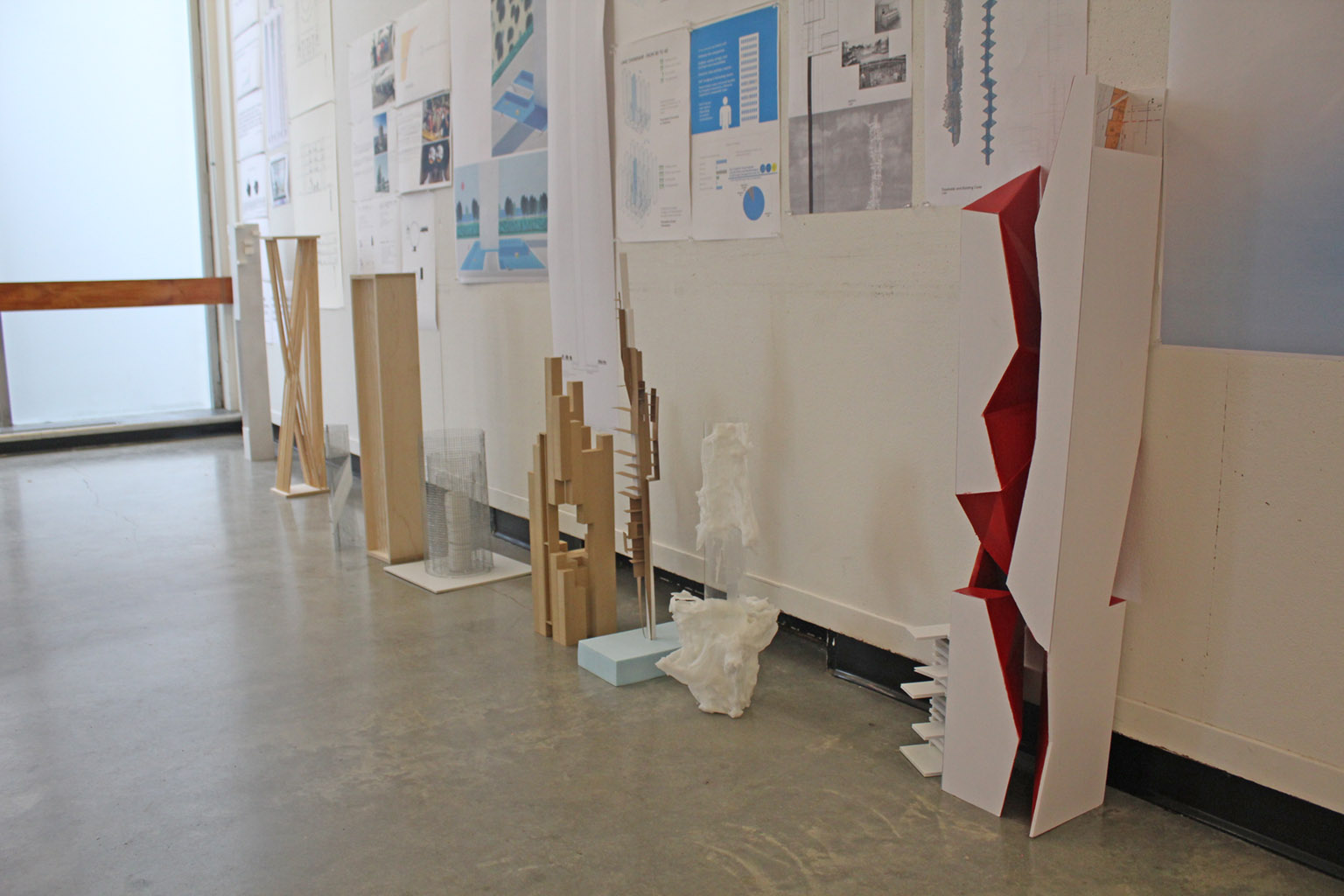 A collection of models and posters from the second studio session.

Just over a month later, and the students meet again for another studio session. This time, three independent reviewers join Matthew in providing feedback on the class’s progress. From the initial models and sketches, the projects have grown significantly in terms of quantity, quality, and conceptual scope. 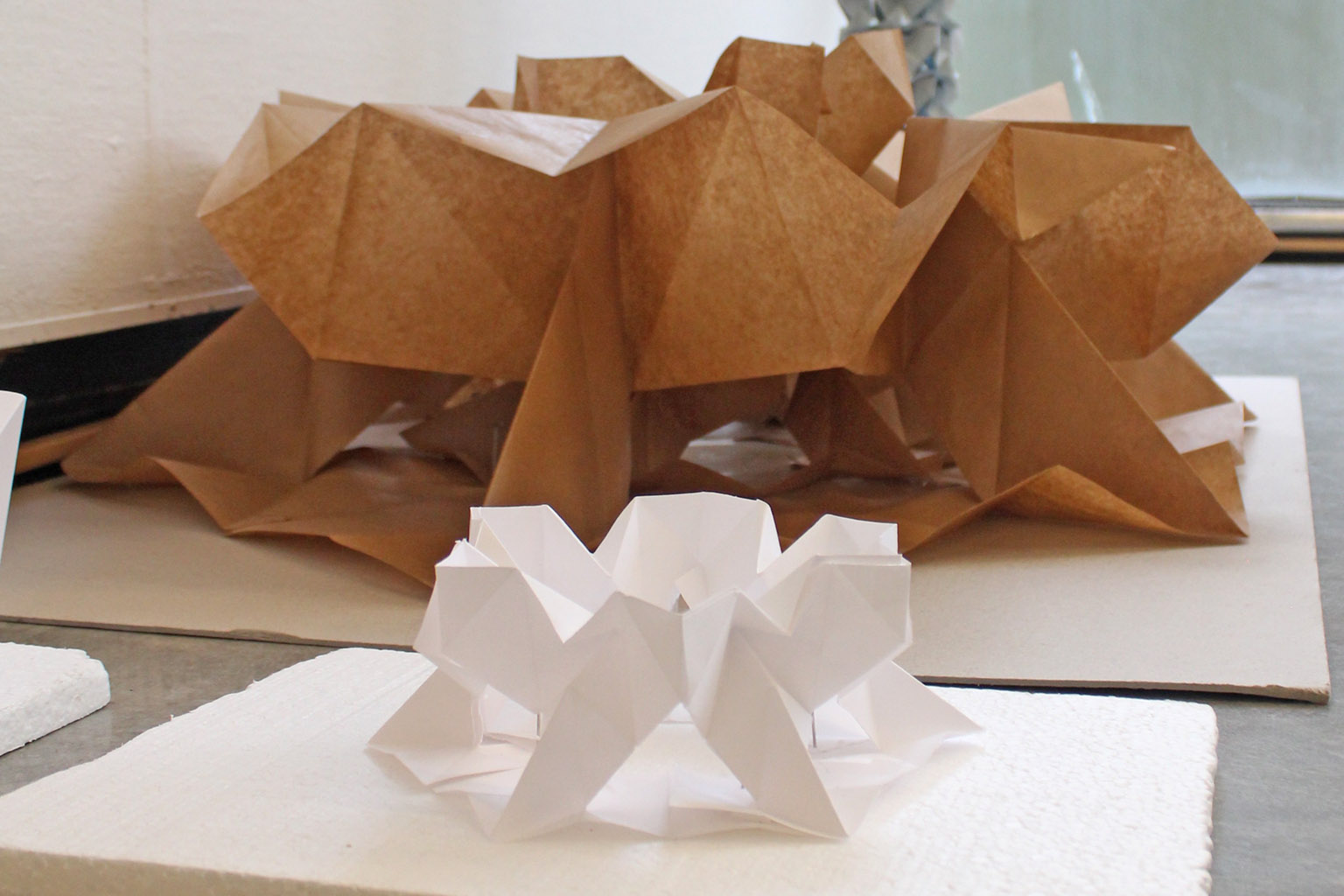 Ornate paper models of sections of a tower.

The room is full of models, posters, diagrams, and graphics. Where the studio began with focusing primarily on the formal characteristics of towers, now social, programmatic, and detailed financial scenarios have been introduced to the project. The expansion of scope is mirrored in the objects being presented. Clearly, a lot has been accomplished over the past few weeks. And if the quantity of materials and quality of conversation is any indication, a lot has also been learned.