In 2015, SALA alums David Zeibin and Michael Wartman founded MIZA Architects Inc. Just one year later, they won “Best in Class” in the single detached dwelling category and “Best Overall” from the jury at the Edmonton Infill Design Competition.

The winning design, titled SlimCity, is a 17-foot wide house that offers to quadruple the amount of people living on the site. The home provides a solution for density problems in mature neighbourhoods without any sacrifice to style. 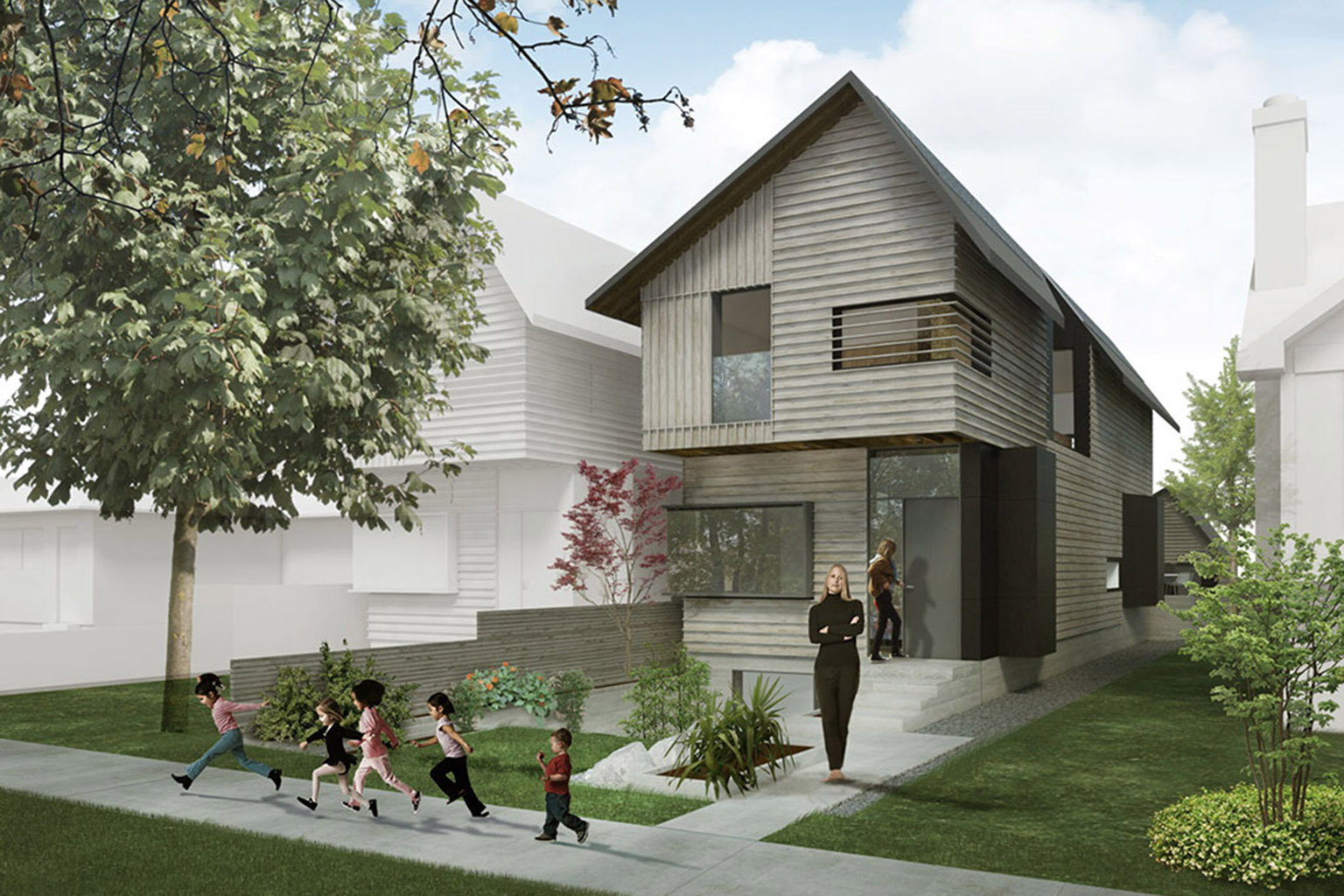 View of the award-winning design from the street.

The recognition is a notable achievement for a practice as young as MIZA, but David and Michael have nearly 20 years of combined experience. They met in 2004 when they began their studies at SALA.

“It’s cliché,” says David, “but, as everyone says, architecture has that unique combination of art and science.” Michael made up his mind in grade five: “We had an architect come to our school on careers day and my best friend and I both decided that it seemed like a cool enough job for us.”

Michael chose to study at SALA because of the travel opportunities: “I had a real thirst to experience the world as a way to broaden my architectural education.” In 2006, he and David spent a study-abroad term in Tokyo.

“I always thought that our year was more tight knit than others,” says David. “But in retrospect, I think it’s actually pretty normal for each year’s students to bond the way ours did.”

Michael has an important piece of advice for students considering studying architecture at SALA: “Don’t worry if you can’t draw or you aren’t designing the most beautiful project in studio. Just make sure you have lots of ideas and are learning something. You can always hire someone to make pretty drawings for you if you’re the boss.”

David enjoyed the breadth of expertise available at the school. “I think one of SALA’s strengths has always been that there isn’t a singular pedagogy that follows one particular person’s research interests—meaning that there’s a great plurality to the work that the school collectively produces.”

After graduating in 2008, Michael was eager to begin work on a broad range of projects. He found a position with “a very young and small office working out of the principal’s living room with one other friend and recent graduate.” Michael enjoyed the experience and found it to be “an extension of my studio experience in many ways, so the transition to work was fairly easy for me.”

SALA had equally prepared David for his first job after graduation: “I happened to really enjoy my first working experience and extended it into a co-op term. My first job out of school was at that same firm, so the transition was easy.”

“When you start your own practice,” says Michael, “you are building more than just architecture. You also need to build the business itself—the structure and systems that facilitate the practice of architecture.”

Starting their own practice is something that David explains as being both “terrifying and exciting.” But it affords them the opportunity to find new ways of doing things and prioritize their time for their young families when needed.

“It is very hard and overwhelming in many ways,” says Michael, “but it is also incredibly rewarding.”

David finds continued fulfillment from architecture because of all things it’s composed of and requires: “It’s technical, social, political, and artful—and a good architect requires skills in all those realms to be successful.”