The set design for Les Belles-soeurs by Sarah, who is currently working on her graduate project, and Nikolai, who graduated in February, marks the first collaboration between SALA students and UBC Theatre & Film. They discovered the set design opportunity last spring when Robert Gardiner, the professor of their Set Design and Theatrical Lighting courses, suggested that they apply.

Sarah and Nikolai share a longstanding interest in theatre. For Sarah, it began at the age of three when she was cast in a Toronto production of Miss Saigon. After that, watching theatre and live performance became a large part of her early education.

Growing up in Moscow, Nikolai’s parents introduced him to the lively theatre scene at the age of five. While pursuing his architecture degree at SALA, he discovered the broader reach of architecture and made the connection with theatre and set design. 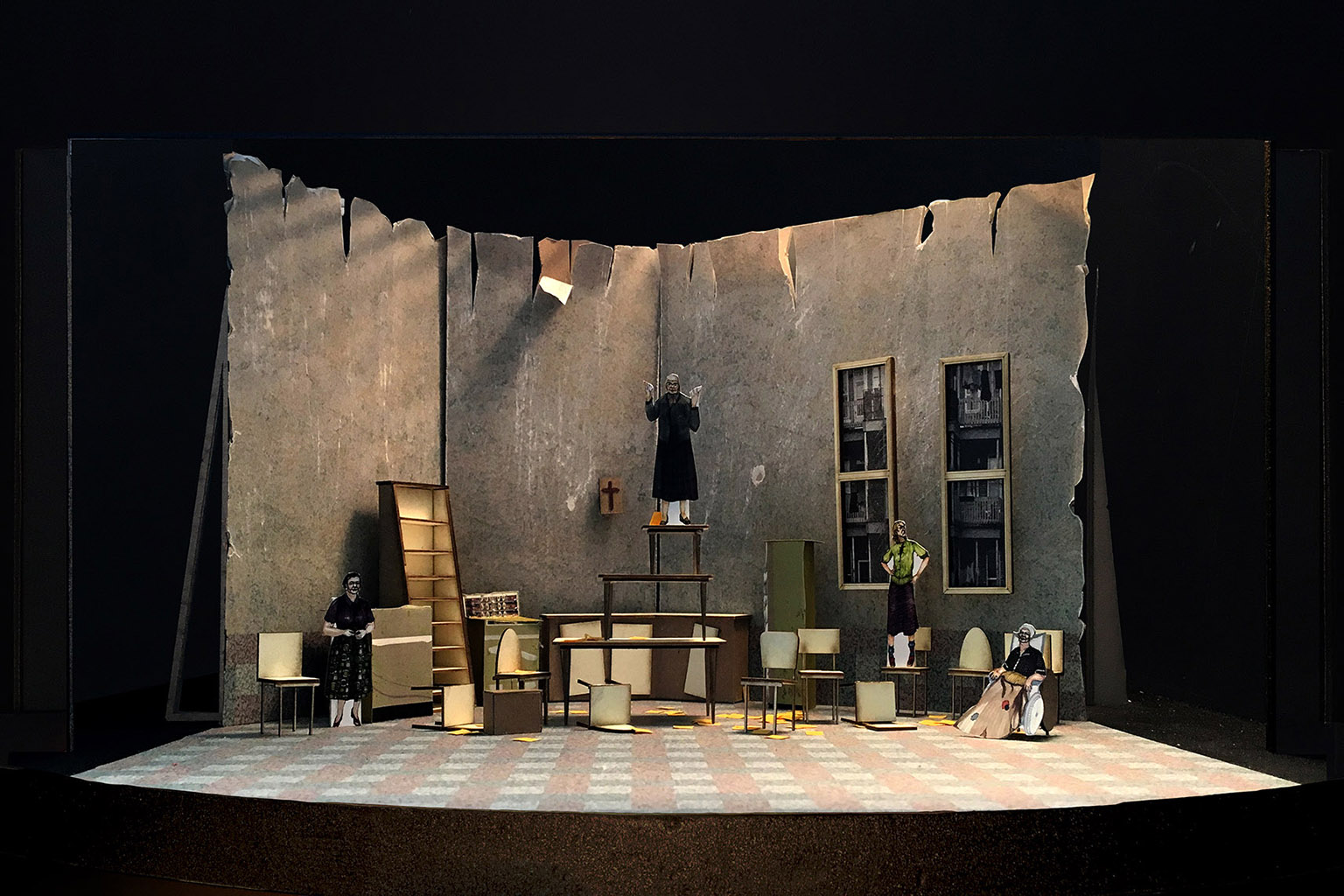 A model of the set for Les Belles-soeurs.

Sarah sees the similarities and differences between architecture and set design: “Both are focused on making space and environments, but I think that the context, scale, and time frame are major factors that differentiate the two disciplines.” She enjoys the challenge of set design as it changes dramatically between directors and productions.

Les Belles-soeurs takes place in Montréal’s Plateau Mont-Royal neighbourhood during the quiet revolution of the 1960s. Staying true to the period required Sarah and Nikolai to do a lot of research, which helped them establish the “tones and textures in the set,” says Sarah.

The play takes place entirely in a kitchen. “Usually these types [of sets] are quite static and prop heavy,” says Sarah, “but we are playing on both those elements.” Nikolai says that they are introducing elements of dreams, play, and the grotesque to “make the set dynamic and become almost another supporting character.” He also promises that there will be a few surprises that will complement the drama, but does not offer any spoilers.

Communication between the creative team on a production like Les Belles-soeurs is an exercise in collaboration: “There are a lot of ideas and elements that can easily conflict with each other,” says Sarah, “so open dialogue between departments is crucial.”

“The director and all the designers work together to tell the story using words, images, and sounds together,” says Nikolai. Sarah also enjoyed being a part of the creative team on Les Belles-soeurs and learned a lot about collaboration in the process.

Les Belles-soeurs runs from March 16 to April 1 at the Frederic Wood Theatre. It is directed by Diane Brown, choreographed by Tara Cheyenne Friedenberg, and written by Michel Tremblay.