What brought you to write Developing Expertise?

Two things. The first is this: In architectural history we do a really good job of telling stories about great and wonderful buildings—how beautiful they are, the designer’s pedigree and lineage, the influences, the shape and design of the building. But we don’t do a very good job of talking about why certain buildings do get built or don’t get built, or who is financing these buildings.

When we do talk about the kind of architect – client relationship, we do that through bespoke stories of a single client hiring an architect to design a private house, and we don’t do a good job when the client starts to look like a big corporation or a developer building something as a speculative building.

So part of my interest was trying to understand the architect – client – investor relationship in a different way then architectural history usually tells that story.

And then the second motivation was to think about how American cities have been reshaped through the twentieth century. Not surprisingly, this was in large part due to the efforts of real estate developers, the ways they helped to shape public policy, and the way that they worked with architects to build the buildings that did get built. 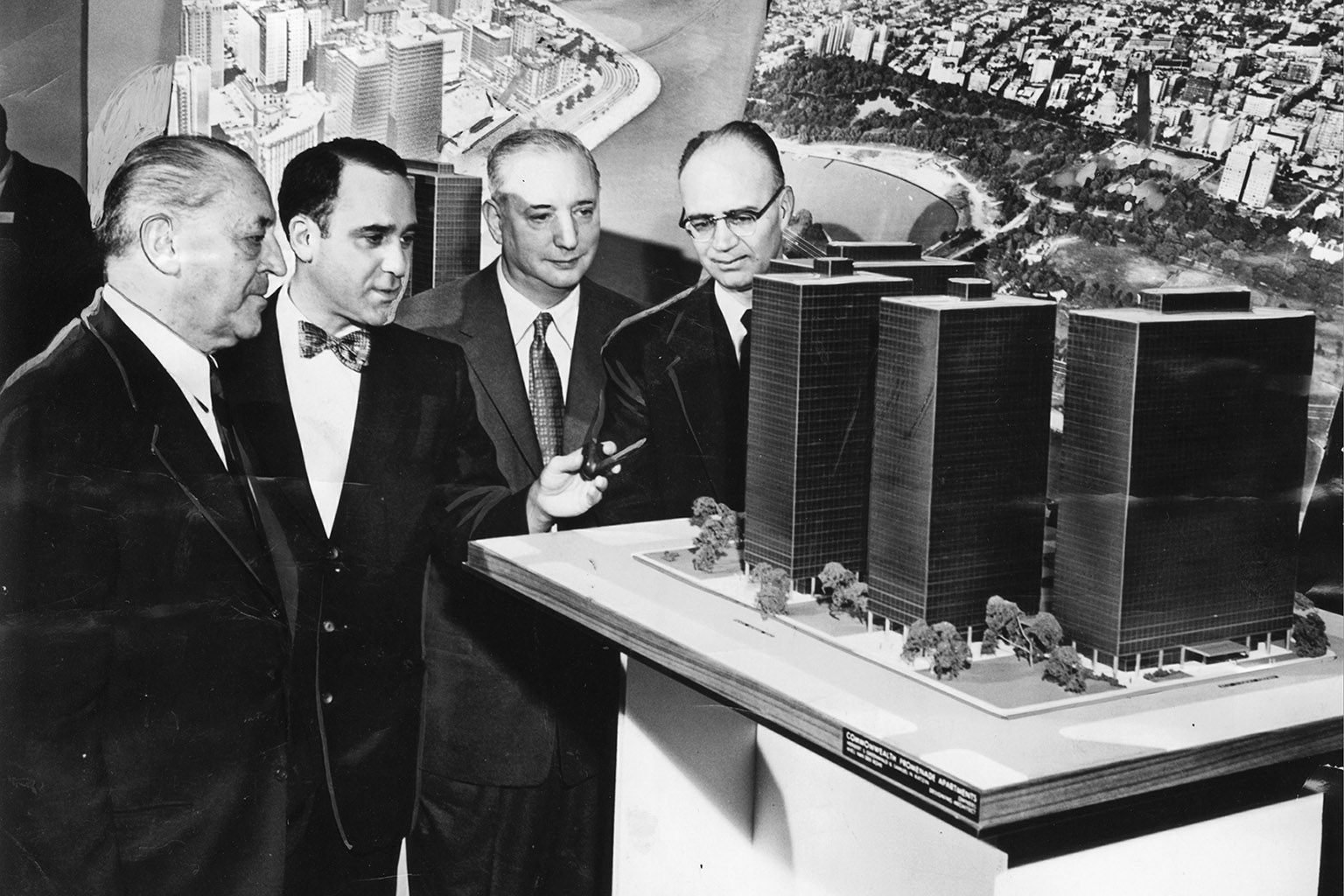 And what was the impact of these real estate developers on cities?

My argument is that American cities, including their downtowns, become more and more suburban because of the influence of real estate developers. In the early 1900s, they were able to refine techniques of land development through working in the suburbs, on the fringes of American cities where there were no regulations to stop them from doing what they wanted.

There, real estate developers had the freedom to work with landscape architects and to shape larger blocks of space at once. They could draw the lines where the streets would go, curve them instead of staying beholden to the gridiron city plan. These freedoms offered real estate developers a new place to explore and try out different ideas. Then, in the latter half of the twentieth century as renewed attention and effort went into remaking the declining downtowns, some of these techniques came to inform the redevelopment of downtowns.

How did this change the look of cities?

One way you see this is with the urban renewal projects of the 1950s and 1960s, when downtowns had more and more new buildings going in that had deeper setbacks—that is, buildings set further away from the sidewalk’s edge. In contrast, city development in the late nineteenth century would put buildings right up against sidewalk. So the deeper setbacks looked different, and they also isolated buildings from their neighbours, which made them lower risk investments as financial instruments.

And real estate developers are geniuses?

Yes, I think that there is a genius in the way that they hone and develop their expertise, hence the title Developing Expertise. In the early twentieth century, real estate developers began professionalizing. They start meeting together at annual conferences, publishing journals, and talking about the work that they do. Cities began calling them for their expertise and asking for advice.

So real estate developers answered the call and began travelling all across the country to talk about what’s best for a city’s downtown and how it can be redeveloped in the most modern way. 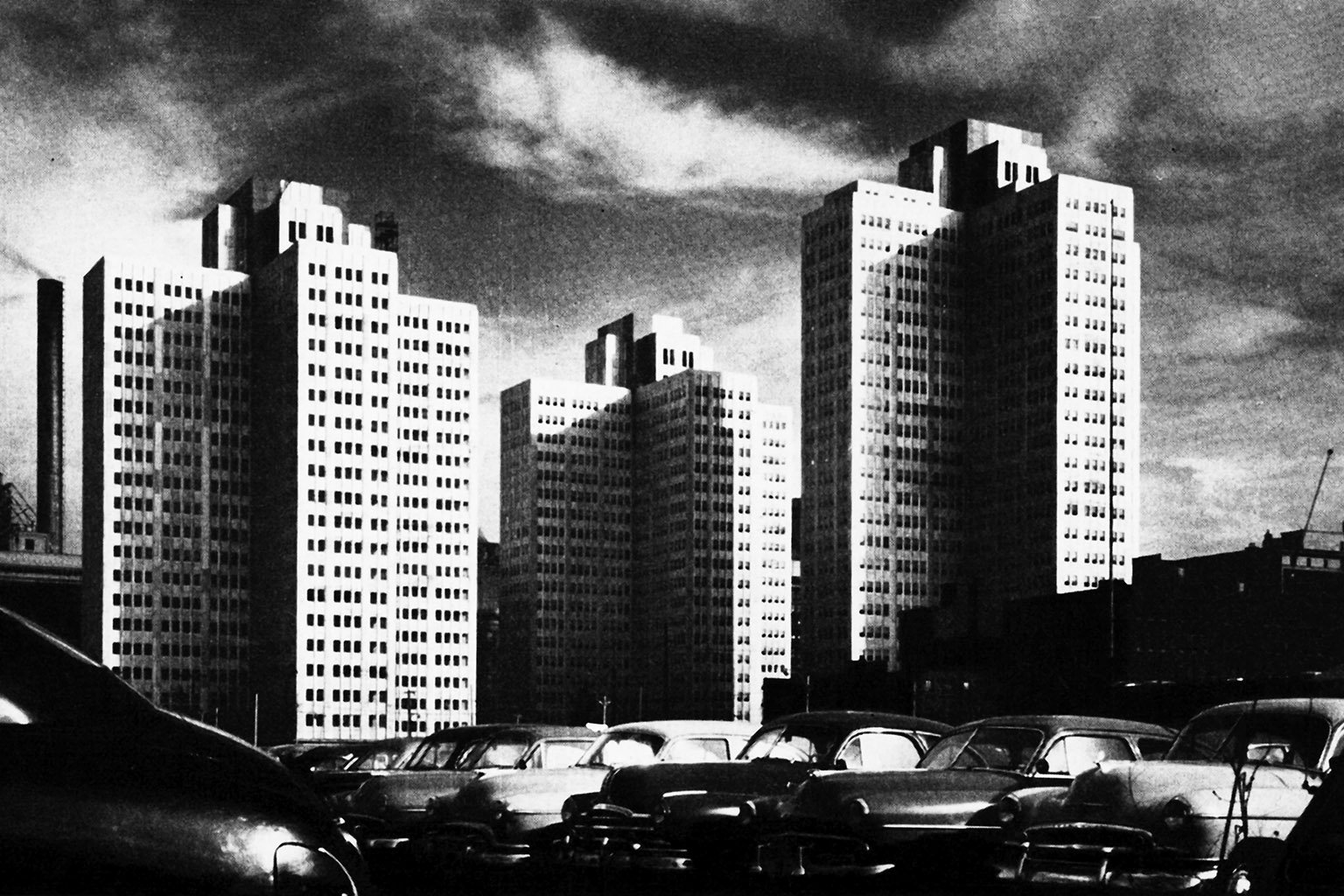 How did real estate developers rebrand themselves as experts?

In the process of professionalization, real estate developers had a tough time. They really had to argue that they were ethical and moral business operators. There was a process of economic, legal, and moral standardization required to elevate all of these different occupations people had into something that was considered a real estate professional.

That means there were procedures established for buying and selling properties, a necessary understanding of the legal landscape across states and municipalities, and the implementation of a code of ethics. Anyone who wanted to join the professional organization would have to sign onto this code of ethics.

They pushed back against the idea that real estate developers were just shady characters trying to swindle people and take their money and leave town. That was the kind of public perception that needed to be defeated. The big project was elevating the positon of the real estate developer by showing the public more of the good work that they do through public consulting and the elevated importance on expertise. The ultimate product of this was the founding of the Urban Land Institute, a non-profit organization offering expert advice about real estate development—which stands today as the premier clearinghouse of Best Practices for real estate developers globally.

Did attaining the status of expert dissolve the tension between profit and morals?

Profit and morals became linked together. To be a good real estate developer or realtor, you had to be an ethical practitioner of your art. You couldn’t be somebody who just trying to swindle. The generation of developers discussed in the book, through the middle of the twentieth century, were pretty much all on board with that.

Some developers pitched that better art is better business. Some developers believe that the best design brings the best price. In this case, design becomes a marketable benefit to a project. Though certainly not always the case, sometimes the business interest and the public good are both well served by this relationship. 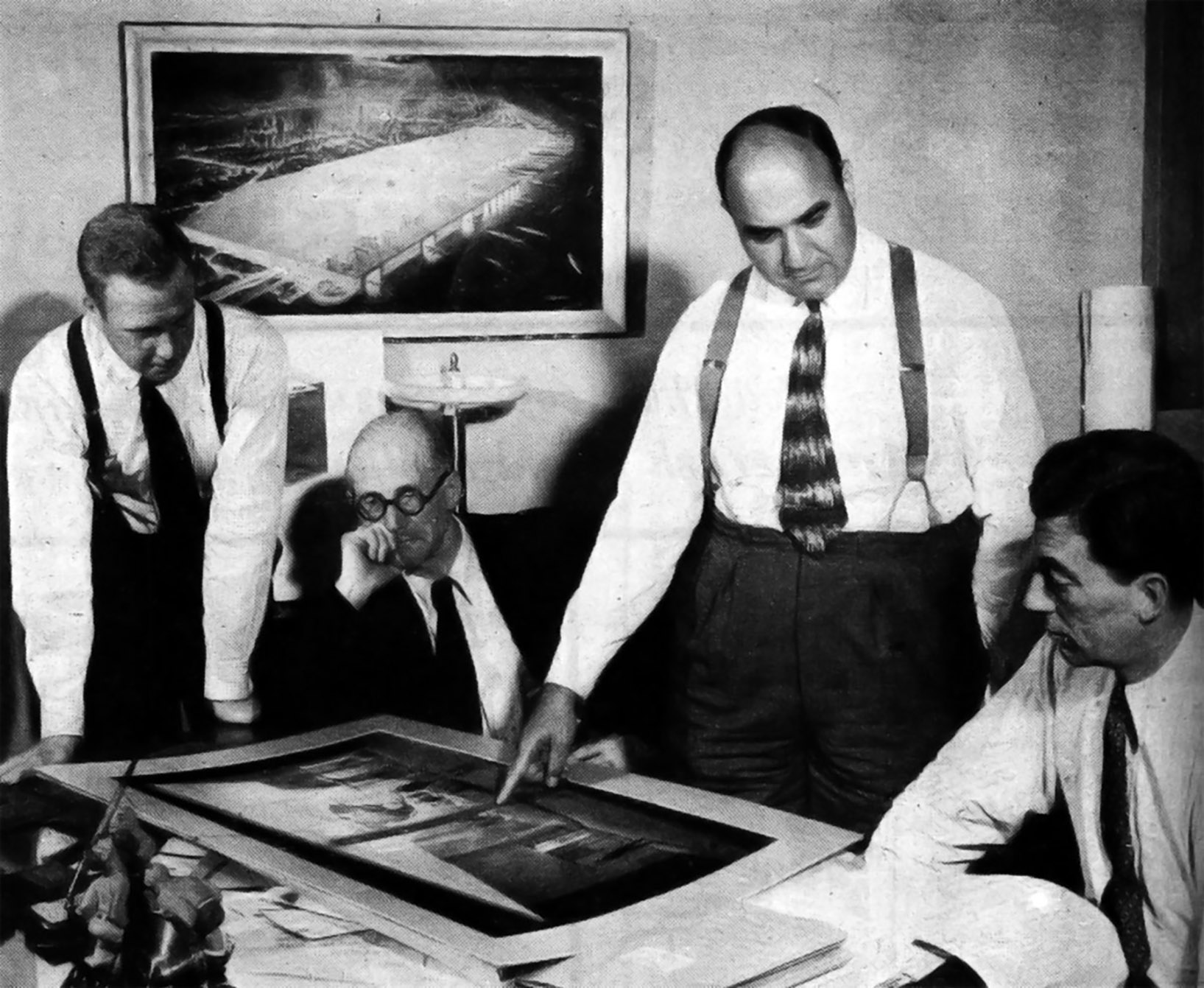 But can real estate developers serve both community and business interests?

In architecture school it’s very typical to hear a professors say dismissively, “oh, that was a speculative building” or “ah, those developers.” When I was a student in architecture school, I would go to my art history class and learn about architectural history and sit in the darkened room with all the slides up on the wall of all these beautiful buildings from all over the world and we’d learn about how they’d come to be, and it was just amazing.

Then you’d step outside and into the world and it was all strip malls and condos and McMansions.

And so you’d go to your studio professors and ask, “but why? Why is it this way?” And the answer was always: “well, it’s the real estate developers. It’s all because of real estate development.” That’s the bad guy in the story of how cities came to be and there’s certainly some truth to that—I’m not trying to paint the picture that all real estate developers are angels—but there are some who really did have a broader vision of what the public good looked like and how their work could bring that to reality.

While I’m interested in more typical cases, the case studies in the book tend to look more at instances where the developers had a more positive vision for how to impact the world, which I think is often what students come into architectural school looking for. They want to be involved in bettering the built environment in some sense. And there are cases of real estate developers looking to do that also.

So the developers capitalized on the marriage of art and business and called it progress?

Absolutely. They said that this was the path forward and claimed that they could provide the vision for how cities could move into the future.

William Zeckendorf, Sr., one of the cases in the book, had an outspoken attitude that this was what was going to save American cities. This was during a moment when it seemed certain that they were going to decline because suburbia was winning. People were moving into the suburbs and cities were losing their tax base.

There were these left behind zones in downtowns because the money to replace infrastructure and maintain public spaces wasn’t there. Zeckendorf made the strong case to say that we have to invest in our cities and we need a vision for what it looks like to live in the city. He thought we couldn’t offer up to the public this notion that the suburban dream is what everyone wants. 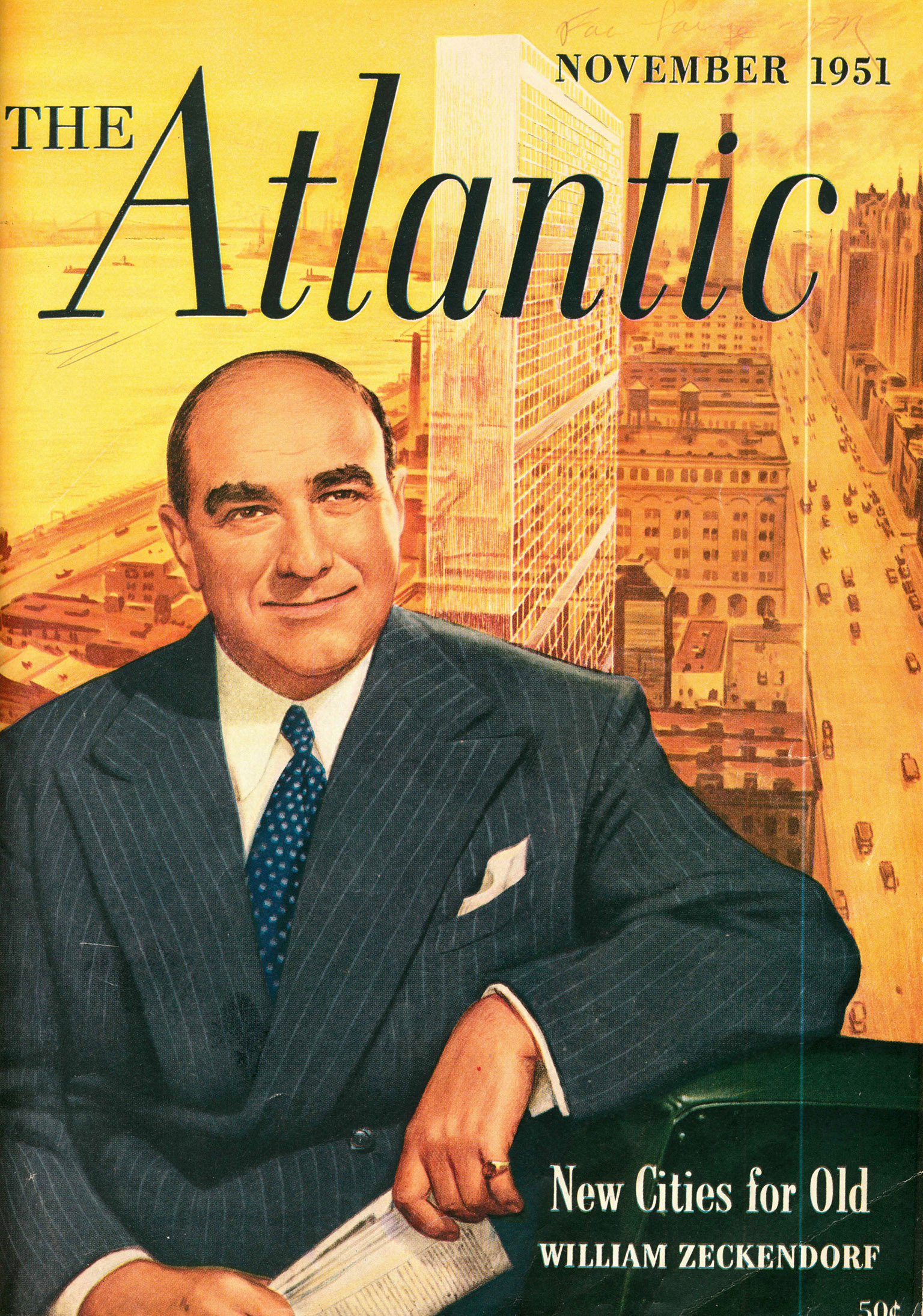 William Zeckendorf on the cover of Atlantic Monthly (November 1951).

What’s the relationship between developers and architects today?

The city planners are saying that their hands are tied. They can set some regulations like zoning, but feel like that’s the only thing they can do to establish what can go where.

And the architects often believe that by the time a project comes into their office it’s already done. The project has already been figured out and they’re given all the basic outlines for a building and told to go draw it up. Architects also feel like they don’t have any control over the project.

The developers feel like they’re in service to the investors on the project, that they’re just middlemen between the heavy pull of big capital on the one side, and architects and designers and engineers and city planners on the other side.

Basically, all parties involved feel like they have no control. Where I see an opening for my work is to understand more about the developer’s relationship with the investors. If the investors are driving the projects, then we know shockingly little about how that plays out. But if it’s true what everyone says, that it all comes back to the money, then there is plenty more work to be done in understanding how investors see projects and how developers translate that perspective into a project. A classic line in the history of architecture is that “form follows function,” but it seems to me that we should find out more about how form might in fact follow finance.

Sara will be speaking about her book on March 6 as part of the ongoing SALA lecture series.

Leila Araghian shortlisted for the 2016 Aga Khan Award for Architecture